I had to stop this video halfway through because my head hurt from just pondering the logistics of it. Unfortunately they don’t provide any data, but the thanks page mentions people who helped “during the last year,” which sounds about right.

How pissed do you think the makers were when they learned the triceratops probably never existed?

Whoa, Watch Out Says That Bird!

I feel like I need to post this video here just to make sure I never lose track of it. I found it a few weeks ago and easily account for a few hundred thousand of it’s 677,000 views. In it, a comedian redubs a NatGeo video in a gay voice and thus makes my entire year.

Pretty NSFW if your employer frowns upon foul language or animals eating each other. I guarantee you’ll have this guy’s voice in your head narrating your daily activities for a few days as well.

A Rare Look Inside Pixar Studios

Does anybody not love Pixar? They get bonus points in my book for having a hidden speakeasy.

EDIT: Well apparently I have to have permission to embed the video here. Cue a few choice curse words then watch it here.

As inspired by a recent The Oatmeal tweet, please do the following as long as you don’t mind nsfw language: 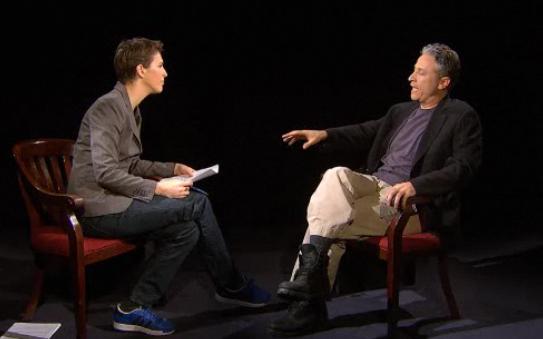 While half-awake in a medication-induced haze three weeks ago, I managed to stumble across the Rachel Maddow / Jon Stewart interview on MSNBC. Of course, at that time I couldn’t comprehend the purpose of socks let alone an hour long debate on media vs. satire, so I marked it for later and get around to watching it tonight. And damn if I didn’t dig it.

I would kill for more interviews like this. No graphics, bells or whistles; just two people sitting and talking. In a seemingly black void no less, which says something about the rarity of these types of interviews. It has nothing to do with politics or ideology (though I do enjoy both Maddow and Stewart), but instead with the deconstruction of topics we otherwise ignore. I’m the guy who will waste an hour watching cellphone video footage of a interview on a college campus just in case the interviewee lets their guard down. But to see this on cable TV? Yes please.

Where else can you find this stuff nowadays? It’s fitting that tonight’s conversation was partially about the 24 hour news’ cacophony of bullshit, because I can’t think of any show where people are frank and open to civilized debate. Charlie Rose can get people to open up, but you only get thirty minutes and that includes at least a dozen bad jokes by Rose. I like Lipton’s style of conversing on Inside the Actors Studio, but there it’s more about the person’s full life and we’re limited to actors. When you throw in the debate requirement, the list shrinks to nill.

So somebody go make a show like that. On the Internet! It could be cheap and easy and I’ll watch the hell out of it.

The Soda Pop Stop is a store in Los Angeles that sells nothing but soda you’ve never heard of. There are over 500 options and somebody needs to immediately get some of the coffee soda into my possession! I couldn’t differ any stronger with him on the carbonated water end though. Long story short, it’s not the best option to drink after a long run, especially when you think it’s normal water.

Although I don’t think this is technically a Rube Goldberg machine because there aren’t any dominos involved.

The Diary of a Disappointed Book

I think the scenery and settings are what I like most about this short video. Just look at the awesome wooden table the dad has!